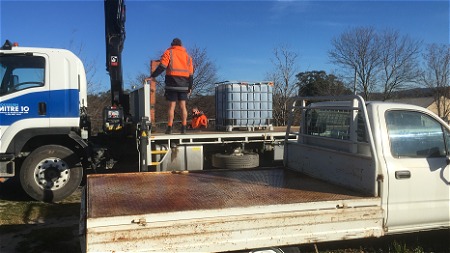 Easy N and ProGibb SG delivered in preparation for the spraying of the pasture.

Toward the end of June we boom sprayed 25 hectares (about 62 acres) of our pasture to knock back the capeweed and other weeds that were choking out the grass as a result of the rain in Autumn.  It worked a treat and now the pasture grasses and clover are peaking through.  So we are about to spray the paddocks again. This time with Easy N and ProGibb SG to encourage the growth of the winter dormant pasture.  My hope is that it will give the pasture a head start for the Spring as well as providing extra feed for the animals.

The Easy N was delivered to Nurrenyen this morning by Goulburn Produce in preparation for the boom spraying tomorrow by Mark Kirton.  Here's hoping for another beautiful winter's day tomorrow - blue skies and no wind.

Today Sam Croker came and preg tested the girls that were put to Newton or impregnated by AI in late Spring and early Summer.  It was great news -  all ten were PTIC  (Pregnancy Tested in Calf).  Now we nervously await the Spring and the calving to see what sort of job Newton has done as a sire.  The proof is in the progeny.

Newton joined to half the herd ; the other half artificially inseminated with Viper.

Today, for the first time, Nurrenyen Newton was introduced to the stud females at Nurrenyen. Because he is related to half the herd, those girls had to be impregnated by AI using semen from Longfield Viper.  Given the heifers we got this Spring from our AI programme we were happy to use the same semen for a second year.

Fingers crossed for a successful joining in 2019! 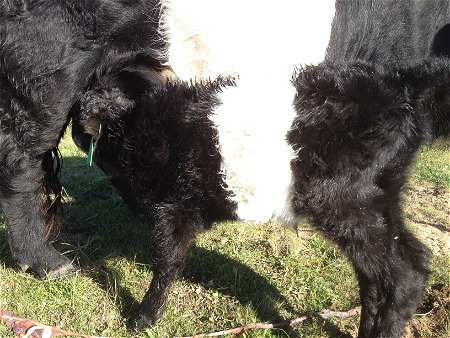 We only had four pregnant cows to calve this year.  This is the result of us reducing the size of the herd becasue of the drought.

Three were impregnated by AI with semen from a previous Grand Champion Belted Galloway Bull at the Royal Canberra, Longfield Viper, and one by natural joining to Nurrenyen DAC.  We were thrilled to get three heifers and one bull calf.  The bull calf, by DAC, was out of Agricolae Dunns and like his mum he is dun in colour.  The others were all by Viper, were black and white and will be registered with Galloways Australia and eventually joined to Nurrenyen Newton. 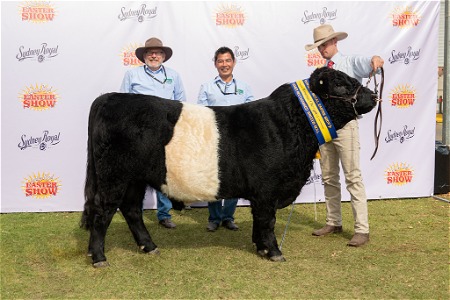 As the only Belted Galloway entered into the stud section of the Royal Sydney Cattle Show in 2019 after winning the blue ribbon in his class (14 - 20 months) Newton was put in the Other Recognised Breeds championship.  He was up against a Droughtmaster bull from Western Australia that was the blue ribbon winner in the Droughtmaster 20 -30 months class. Although he was favourably commented upon by the judge, Harris Thompson, this time Newton came in second as the Reserve Champion Bull, Other Recognised Breeds.

In an article in "The Land" published on the day of judging, Mr Thompson was quoted as making these comments about the two bulls vying for the Championship.

There were only two bulls, but two different types.

"The Belted Galloway has full length of body and plenty of length, while the Droughtmaster displays plenty of muscle and length in all places he needs it," he said.

However, while the Belted Galloway was a credit to his breed, Mr Thompson chose as his champion, the Droughtmaster.

"Between the bulls the Droughtmaster has a little more strength on top and a little more muscle down through the lower thigh.   A really impressive calf with plenty of muscle and meat where he needs it. Just his overall power and muscle that got him over the Belted Galloway."

Mr Thompson said it was a difficult decision as both were very good in their own right.

Jon, Sam and I were happy with those comments!! 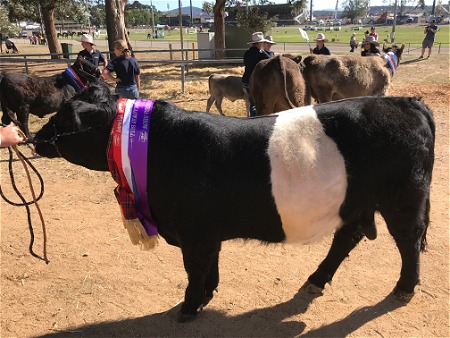 This was particulalrly pleasing given the amount of competition present at a feature show. 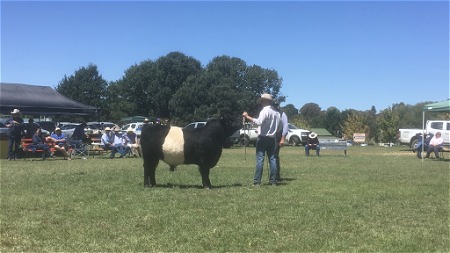 Today Nurrenyen Newton attended his first show and was adjudged the Champion Belted galloway Junior Bull and Grand Champion Bull Other Recognised Breeds - a great first outing for the boy.  You can hear the judges comments in the video under Standing Sires.  Thanks to Sam Croker for preparing him so well.